What’s happening in there

Always loved the image of little people inside there doing everything. From Georgie’s Germs in Wham! way back. Gynaecologist Fritz Kahn‘s did a good many; this brilliant animation brings his already outstanding 1927 image to life.

From Beth Shortt: the Eye Man, and the Kidney Factory. These are her copyright. 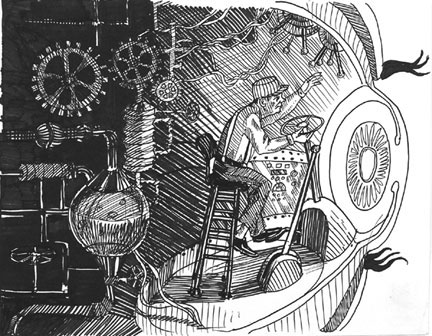 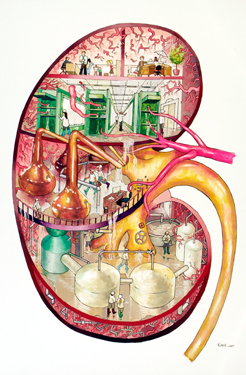 Yes thanks but not every day 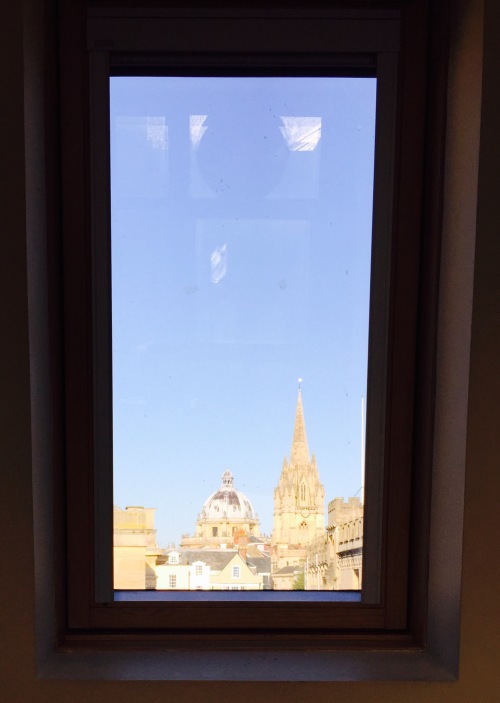 Like chocolate.
It was great to meet a big group at the young adults clinic in Oxford yesterday. A bit older than I expected, and where were the girls and women, but their tales were the same as everyone tells really. So I asked them about looking up results online, and several of them had access, but most only used it sometimes.
Healthy behaviour probably. People who cope well with long term kidney disease seem to go through phases of paying close, even intense attention to getting things right, allowing them to move on to periods where they can just lead normal lives.

Organs at the Edinburgh Festival

The Organ Grinders at Ghillie Dhu

Andy Williamson is a talented jazz saxophonist who has played at the Edinburgh Festival many times in the past.  But he also has PKD, and has a kidney transplant donated  3 years ago by his friend and keyboard player Maff Potts (actually, Maff plays the (Hammond) organ).  They did a fantastic show in a smart converted church, starting at 11pm, and the only problem was that I had to do a clinic next morning.  Thanks to Thursday 12th’s patients for being understanding.  Andy was puzzled that their biggest hit was ‘Toxic‘ (Britney Spears) in the style of Johnny Cash, but I thought their Stormy Monday, and the Russian song on the tables, were great.

The organ at St Cecilia's Hall

No holiday this summer so have caught a lot of great things at the Fringe, but because the music at St Cecilia’s Hall was so beautiful it’s nice to find an excuse to put in another organ.

Hello it’s Margaret – I have to say, I’m a bit disappointed, I thought you’d be home starting to cook my elaborate dinner.  Ummm, it’s 6.30 and I just rang to say I’m about to leave, but I’ve only checked everything in the house 5 times so far, so I’ll probably need to do it a couple more times and then I’ll come along so I’ll be with you, I don’t know, probably 9 o’clockish.  I’m really looking forward to it – I hope you are!  See you soon

Before sitting down to breakfast I go out of the room twice in a stompy manner because I don’t like the way my brothers are looking at me.  I eat three bowls of rice crispies with about 3 sugar puffs on the top of each.  Then I watch Mummy rubbing out all the home work I did last night while Daddy was looking after me, because it isn’t tidy enough.  So now I have to do orl of it again and I might as well not have bothered doing it last night.

Next I spend ten minutes sliding about in the utility room in my socks, so cleaning up the stick insect poo that is on the floor.  Daddy and Mummy remind me four times that I’m meant to be doing my teeth, and I have a fight with Isaac about whether the door should be half way or three quarters of the way closed.  Then there’s just time for 10 minutes of homework (that’s five words) before it’s time to go to school with a note for Mrs. Jones saying please can I have longer to do it.  Mummy screams it’s time to go now and it’s my fault if we’re late, so I put on my shoes, pull my socks right down to my ankles, ruffle up my hair to make it look as if it isn’t combed, and wait outside for about 5 minutes while Mummy runs up and down the stairs shouting.

PS  Isaac and Samuel are worse than this.

Joys and disappointments in the summer holiday (ii)

Here is one of my dad’s totally stupid ideas.  He suggested pretending that some of the red-headed Irish girls we met one evening in France were called Joy, and giving a blow-by-blow account of the night’s proceedings.  That would be ‘Joys in the summer holiday’, though I know I wouldn’t get away with it.  First of all, they were actually called Sinead, Aiofe, and (sigh) Victoria.  Secondly, despite the deceitful effect of the silvery moonlight, they turned out to have just a tiny aura of disappointment.  Even Victoria Joy.  I know it is a terrible thing to say, but they didn’t have the exotic allure of The Arcata Girls, who we met last year at Grizzly Creek.  You won’t know Arcata.  It has a webcam, and a major attraction is its swamp.  No, I’ve never been there either, but you see what I mean by exotic allure?  So the red-headed Joys would have to be classified, reluctantly, as a disappointment, except for the third and final problem.  You said you didn’t want to hear about our sordid dating experiences. So here we are at the end of the second paragraph, with nothing useful said on the subject.  Null points.  And I think I started a sentence with a sentence with a conjunction, so that would be minus uno.  Not a brilliant start.

So I’d better tell you about a real joy from our French holiday.  We went to Paris.  Romantic, n’est ce pas?  It was great.  We got up at 5am, and got lost on the way to the station before taking a train journey that lasted about three hours.  Then, because it was such a lovely day in Paris, my dad had this great idea that we should do a 10 mile walking tour of the city in thirty degree sunshine before going to the Musee d’Orsay.  The pictures in there are so great that they had about two thousand people in each room.  At the ends of the building are big station clocks that look as if they were made for Buster Keaton to hang from.  Probably to get cool.  One was just by the teashop, which we reached as it closed.  The best picture was that last one that Van Gogh painted just before he killed himself.  Crows over a cornfield.  I really identified with that one.  Boy, was that day a joy.  Do I love Paris.

Joys and disappointments in the summer holiday (i)

You would think that writing that essay about your holidays would get easier as you got older.  Instead it seems to get more and more difficult.  And to complicate it with joys and disappointments – well, that creates a problem.  My friend Kirsten said ‘Tha’s jus’ shan’, but as I said to her, that is not the sort of language you can use in an English assignment, though she’ll find it easy otherwise.  She will find it difficult to know what to leave out.  Kirsten is in the heights of shrieking euphoria if she just sees someone in the street who looks a bit like some guy from Brookside (joy).  Whereas she will descend into a black gloom for the rest of the day if there’s not enough milk in the morning for her additive-laden psycho-pops (disappointment).  Which she only eats about twelve of, to save calories, then has a Mars Bar and a bag of crisps at break.  She can have a dozen joys and disappointments a day.  At the other extreme is my middle brother, who my mother says is about as emotional as a toilet seat.  Actually she said ‘goddam toilet seat’. Apparently that makes it a less terrible thing to say, because it is a Literary Quote, rather than worse because she said ‘goddam’, or because he might be permanently emotionally scarred.  You can’t beat rules like that.

I’m a lot more emotional than a toilet seat, and a little more emotional than my brother, but I’m pretty level-headed, and I’m struggling to find good examples of joys and disappointments. I probably need at least six to spin out this thing for long enough.  Fifteen if I write in my usual style, which I like to call telegraphic and to the point.  My dad calls it featureless and dull.  He says I should write in this style, that you are reading today, with rubbish spilling out all over the place, and totally irrelevant nonsense inserted apparently at random, as if the writer is suffering from the effects of a hallucinogenic drug.  That way I’ll only need three, more in keeping with my personality.  ‘Make them work for it’, he says. He’s at his worst when trying to be helpful like that.

The Human Tissue Authority recently approved the 3,000th living transplant in three years – most of these were kidney donors.   Living related transplants form an increasingly important proportion of all kidney transplants.

Remarkably, a growing number of these are coming from ordinary people who have no relationship to the recipient of their kidney – ‘altruistic donors’.  It seems to be getting easier to do this, but saying that you’re going to give one of your kidneys to an unknown stranger does seem to upset some people, even friends and family.

Altruistic kidney donation only became legal in the UK in 2008; 15 were approved in 2008/9 and that looks like being exceeded again this year.  These very generous, wonderful people have made a huge difference to many lives – not just the recipients, each time a transplant is done.  Here are some tremendous stories from four of them:

John Fletcher, a farmer in Fife
Paul Vandenbosch, a GP from Surrey
Maggie Harris, a teacher from Manchester
Barbara Ryder, from Cornwall

There are lots of sites on the web about altruistic donation, but if you’re thinking of it, go to your doctor, and best to mention it to your family too. 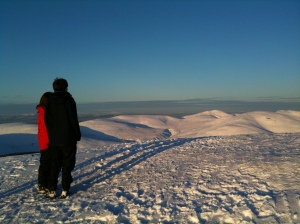 Saturday morning, slightly closer to Christmas than ideal for this kind of venture.  All has gone white.  Stuffed nose.  Sore throat.  Helen has risen late and as is her wont, at 11.30am has begun to look around the house for the first time this week and has suddenly discovered everything is untidy.  It’s quite clear no one else ever does anything in this house.  By 3.30 we will have been nearly adequately chided and will have constructed a to-do list and a 42 item shopping list.  By 4.30 we will leave the house, and at 6.40 we will be escorted out of John Lewis by security guards having made two purchases, one from the list and the other costing £353.  On the way home we will pick up a Swedish DVD with subtitles and afterwards will fall asleep on the sofa.  On Sunday we will need a change or a rest.

We spent more days in the hills this year.  In part this was to be sure that volunteering to join a sponsored stroll up Ben Nevis wasn’t crazy, but it’s been lovely too, and we’ve taken visitors with us, some of their own free will.

The Ben Nevis escapade that many people very kindly sponsored us for was really worth it, it was a great weekend.  It felt like time to do a Kidney Research UK event after being involved with it for so long – in recent years as a trustee.  Our JustGiving  page is still open if anyone is keen, but we can strongly recommend KRUK events, we’d sponsor you and you’d have a great time.  A really interesting mix of people to share hotel, exhaustion, even a punishing ceilidh on return.  The next morning we walked along Glen Nevis and had fantastic fish and chips at the Real Food Cafe at Tyndrum.